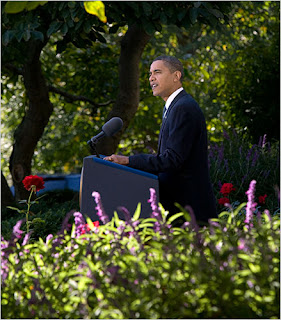 I, like most of the world was completely shocked when it was announced President Obama won the Nobel Peace Prize. It is such a great honor but I mean seriously? I am huge supporter, don't get me wrong. But I think it's a little soon for him to getting such a prestigious award. He's only been in office for 10 months and of course we all know he is working very hard to try to gain much needed exposure to the most important things OUR generation has to worry about such as climate change, the economy, nuclear wars, clash of religions and many more.
However, doesn't it seem that he is being awarded for something he hasn't actually accomplished yet. Isn't it a little premature? It's like a scientist getting an award for an experiment he hasn't completed yet!
In any case, I congratulate him because he is definitely on the right track, and even though he hasn't done anything that we can materialize yet , Obama continues to offer the change our generation wants to see in the world.
Posted by msteasea at 5:19 PM