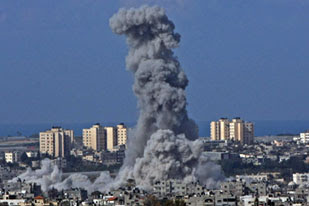 It is very depressing to see what is going on in the world right now...with the Economic Crisis on its way and the war going on in the Middle East, there is too much conflict and not enough cooperation going on. It's absoloutely horrifying seeing these pictures....but regardless..

I'm just going to say that I am not pro-Palestine or pro-Israel. Many people come to their conclusion based on the bombardment of information they hear or read from the media sources. People turn to mass media as a source of information. Newspapers and news stations usually deliver a biased stance on on events and will unlikely have an impartial stance on things. But if you are looking to truly have an objective stance the mass media is the wrong place to look. Studying the historical context to influence your attitudes and ideas about the whole situation is essential. I'm not an expert on this whole problem but from what I've learned is What has been going on in the Middle East between the Palestinians and Israel has been going on for a very long time and is not some erratic action Israel decided to take on out of nowhere such as launching rockets into the Gaza Strip. Ever since the British and the rest of its allies "decided" to give the land Israel, to the Jews after WW2, the Palestinians land was taken away from them and given to the Jewish People. These Palestinian refugees are currently living in the outskirts of Israel in the Gaza Strip and the West Bank. Hamas, who is the overarching government in the Gaza strip have constantly launched rockets into the south of Israel on a daily basis. That is prior, to this whole occurrence, there was an established cease fire. If you can understand, Israel, has taken matters into their own hands and has decided to defend it self and the reason so many have civilians have been killed is because Hamas likes to situate themselves in social settings, such as schools, hospitals, mosques etc. Even though they are a recognized terrorist group by the U.S and it's allies because of their chosen tactics to further their political goals (i.e. suicide bombings), they were democratically elected by the Palestinian people. Hamas has done alot of good for the Palestinians in terms of executing much needed social programs such as providing adequate healthcare and proper schooling.

Hamas's soldiers are indistinguishable from regular civilians and most would say, their military capabilities are disorganized and less developled than the Israeli's. The Israels military system is quite efficent and sophisticated compared to other military regimes in the Middle East. Israels goal is to try demobolize Hamas in order for them to stop sending their missiles/rockets over into Israel. In addition- there is a religious conflict at large. Israel (a Jewish state) is surrounded by Muslim countries, and perhaps there justification of launching these air strikes is their way of trying to deter Hamas and inevitably protect themselves against the religious revival of Muslim states. However, the US will always back them up thanks to strong Jewish lobbying in the states.

In any case, my point is...try not to rely solely on the mass media when you base an opinion, because media sources are incredibly bias and sometimes leave it little bits and pieces. Sometimes, what is being reported may be taken way out of context. I'm not saying newspapers are wrong - they offer the counterpoint and keeps governments in check, but their main goal is to try to sell newspapers and perhaps certain stories will tend to be sensationlized. Check the facts and don't take things at face value. I've come to realize between Israel and Palestine that both sides are at fault and the United Nation mandates can only do so much..Once History starts it is very difficult to come to a peace negotiation or resolution because both parties are out for their own self interest and if a decision isn't made without both sides being entirely satisfactory than nothing is accomplished, and innocent people are left to fend for themselves...
Posted by msteasea at 8:55 PM