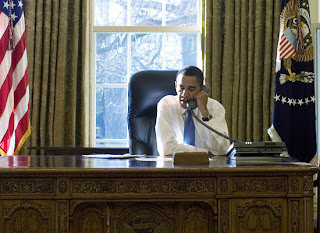 Wednesday: Israeli soldiers started too pull out from Gaza.


Wow, it's quite extraordinary to see Barack Obama in the Oval office were many great presidents such as FDR, Kennedy, and Clinton have once sat in. There are so many people who believe in Obama and he gives everyone hope for a better America.' He's not only touched Americans, but he has spread his charismatic personality and beacon of hope to us in Canada, down in Australia, Singapore, France, Kenya and so much more.
It is important to understand that there are great expectations for this great man and we need to be mindful of what is to come. Before Obama succeeds he will most likely fail, as the great Michael Jordan has quoted. But he's just inherited two hot wars, an economic crisis, America's tarnished reputation in the world and there is a great need to rebuild America's infrastructure. Indeed, he has a chosen a well rounded group of advisers who will most likely bicker about what is best for the country and tell him what kind of decisions to make. But those appointed people are only advising him. Ultimately only Obama can make those kinds of executive decisions for the people of America. And the foreign policy decisions he makes will obviously make an impact in the world. Can't you just see it now?? the OBAMA DOCTRINE in all the political science/world issue textbooks.
JFK, said in one of his speeches.."ask not what your country can do for you - ask what you can do for your country." I think this is quite important. People question " how is Obama going to unite the country?" Obama has the ability to inspire people from all across the nation and the world. When I see photos of Obama, and watch clips of him interacting with different people who live in the towns and cities he visits, he establishes a personal conversation with them. Obama looks at the person with great sincerity, shakes their hand and listens to what people are saying to him. More importantly, he recognizes them as citizens of a country whom elected him to serve his country and its people. He doesn't seem as if he is better than any of them just because he's the president. Obama, not only represents the first Black or half Black president, but he represents someone that anyone could look up too and become. It seems as if the politicians that I hear about in the media are corrupt and perhaps out for their own political agenda. These politicians have no disregard for anyone but themselves. They think they are untouchables and above the law. But I feel as if Obama is different. He represents someone we can respect as a role model for young people, and trust. He's not there for himself, but he's there for the people whom elected him. I don't know if this is a trend, and I hope that it doesn't fade away now that Obama is president, but there are more young people getting involved in the whole political process. He inspires young people to get involve with their community and their country. He is also trying to make the government more transparent so people, especially the younger generation will become involved in the political process. Our generation now has to live with all the mistakes, past generations have made regarding the economy and environment, and the only way we can change that is to get involve and engage with the government. If we want to see change in the future, change needs to start right now.
For me, I've come to recognize many things in the world that greatly needs to be improved on and when I look at Obama, I see a glimpse of hope that he can change America to become that force for good. Now more than ever, the world needs it. America's foreign policy needs to be geared toward multilateralism and establishment of more accountability and transparency in the financial system and governmental sectors. In regards to foreign policy, the world that we live in now is more fragile than ever. We're living in a post 9/11 era, where not only states can only call war or perhaps invade other states but there is a threat against external actors such as terrorist groups. There will be countries and external actors who will test the response of America's newly elected president. Whatever happens, it seems Obama is the right man for the job and has a good head on his shoulders. On the other hand, he hasn't exactly done anything yet because he's new at his job...but I will and I'm sure the rest of the world will be monitoring every move he makes. As I said in the beginning, before he succeeds...he will fail..everyone is going to be very critical of him....you most definitely can count on that.
Posted by msteasea at 1:51 PM