M.I.A Rockin on Stage on her due date 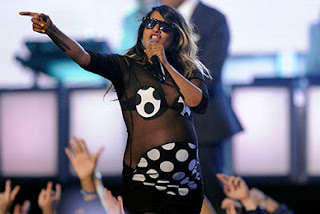 I was introduced to MIA's music a couple years ago by some good friends, and I've been such a huge fan since. She's got a unique style compared to alot of the artist out there.'. I prefer MIA's older album KALA, which was one of my faves. She's also done a ton of mash ups of other songs. One in particular that I loved was with Madonna's "Hung Up' (Thanks Clara, if you ever read this). She's no longer that underground artist who people used to get excited about, since her hit 'paper planes' has made its way through the club scene and her music has now been incorporated into a lot heavy hitter rap artists music. It's not that I'm bothered that she's a more main stream, but there are times when you hear a song over and over again, it eventually gets over played and then you lose interest.... I can't help it! Anyways, she's got a lot of talent and is very committed to not only music but politics and culture. Check out her performance as she rocks out in her lady bug inspired outfit..and killer shades. I don't know if she's singing, it doesn't really sound like it...but eh she looks absolutely stunning! Totally Wicked. The whole time I was thinking what if her water broke. It would been like "swagga like...uhh.AHHHH.(with a stunned look on her face)..I think my water broke.." Could you picture it like I can?? Anyways, just check it.